It was a close call. Saturday was the anniversary of Pettigrew’s adoption and a celebratory weekend was planned.

His grandparents, aunts, and cousin started the festivities, gifting a stuffed sloth, all dangly arms and legs with a squeaker enticingly buried somewhere in its depths. But, Pettigrew was thwarted in his attempts to lick the plates in the dishwasher. (We’re careful what he ingests since he has a sensitive tummy).

Taking matters into his own paws, he slipped outside, wiggled under the grill cover, and liberated the drip pan. By the time I found him, bits of charred food littered the ground and he was standing next to an upside down pan. The only question was, just how much had Pettigrew ingested. He wasn’t telling.

To celebrate his entry into the double digits (we think he’s 10 years old now), we had planned a trip to our local boutique pet store to stock up on treats. Whether Pettigrew would be able to partake depended on how much of the grill pan’s contents he had consumed. Or, more pointedly, the state of his GI system.

Stepping out with new leash.

Saturday morning walk went OK. The true test however was the afternoon walk.

Pettigrew knew something was afoot. He was sporting a new leash and had already received a blanket on which to curl up under the piano. But oh, he could smell there were some ingestible goodies too.

On the afternoon walk he quickly did his business and turned for home. I knew this could mean one of two things: either his stomach was upset and it was going to be a very “productive” walk or he had been unusually efficient in completing his toilette in order to get back to the treats. Taking an educated guess, I patted my pockets to confirm I had brought enough bags and dragged him onward.

And he was fine! 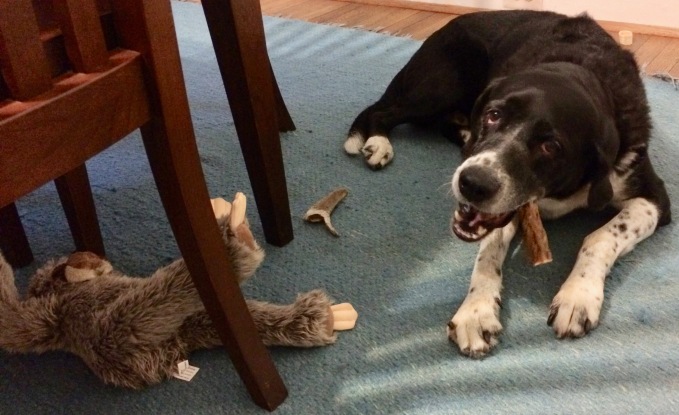 First gift—a sheep horn. Before bed he scored a braided stick. A wonderful way to usher in a new decade!

I live in the suburbs of Washington, DC with my dog, husband, and two sons. I teach environmental education and am a librarian. I also write children's books and hope to be published one day. In the meantime, I blog about the crazy things my dog Pettigrew does. View all posts by authorpolk

6 thoughts on “Tragedy Averted: In the Double Digits Now”